First signing of the day for Winnipeg. 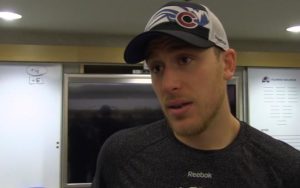 First NHL deal is done for the Jets as they bring in centre Shawn Matthias on a two year deal.  The 6’4″ centre has played 479 NHL games for the Panthers, Canucks, Leafs and Avalanche.  Elliotte Friedman reporting that it is a two year deal ($2.125M AAV).  The 28 year old Matthias had 12 goals (six goals in 51 games with Leafs and six goals in 20 games with Avalanche) last season.  His best production came with the Canucks when he scored 18 goals and added nine assists back in 2014-15.

His addition to the squad will put pressure down the middle behind Mark Scheifele and Bryan Little.  He will join Andrew Copp, Alexander Burmistrov and Adam Lowry in the centre role.

And it looks like he is a bit excited as well….

Very excited actually I’m **explicit**pumped to be joining the @NHLJets for the next two years! Let’s get it! What a Canada Day!