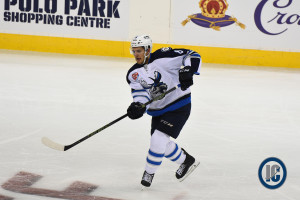 Brenden Kitchton led the Moose in scoring last season and will be bringing his talents back to Winnipeg for at least one more year.

With the departure of former Manitba captain John Albert to Finland next season, I had Brenden Kitchton as one possible replacement as captain of the Moose.  With his signing we shall see if that is the next move for this organization.

The Winnipeg Jets announced they have agreed to terms with defenceman Brenden Kichton on a one-year, two-way contract worth an average annual value of $600,000 in the NHL.

Kichton, 24, led the Manitoba Moose in scoring last season with 41 points (11G, 30A) in 68 games. Kichton was called up twice by the Winnipeg Jets last season but did not see any game action. Kichton has played three professional seasons after being drafted by the Jets in the seventh round, 190th overall in 2013. Over his AHL career, the native of Spruce Grove, Alta., has 118 points (29G, 89A) in 209 games.