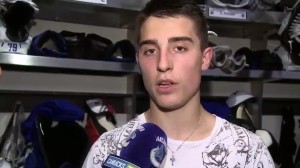 Jets got into the college free agent market today signing forward Brandon Tanev to a one year, two-way contract.  Tanev played alongside Jets 2015 (3rd round) pick Erik Foley for the Providence Friars.

Here is what his brother Chris Tanev who plays for the Vancouver Canucks had to say to TSN Radio Vancouver:  “He’s worked really hard. He can skate, he’s one of the faster people I’ve been on the ice with. He can play”.

Darren Dreger (via Chris Nicols) had this to say about Tanev “At one point, it was in the double digits” in terms of NHL teams interested in Brandon Tanev. #NHLJets “did well in this one.”

The Winnipeg Jets announced today, they have agreed to terms with free-agent college forward Brandon Tanev on a one-year, two-way contract for the remainder of the 2015-16 season for a pro-rated average annual value of $925,000.

Tanev, 24, just completed his senior year at Providence College where the left-winger tallied 28 points (15G, 13A) in 38 games for the Friars. Providence’s season came to an end after a loss to Minnesota-Duluth on Mar. 25. Tanev helped the Friars win the 2015 NCAA Men’s Hockey Championship, scoring the game-winning goal in the championship final against Boston University. Tanev finished his NCAA career with 77 points (35G, 42A) in 149 games. He joined Providence College after playing junior hockey with the Surrey Eagles of the British Columbia Hockey League.

“We are very excited that Brandon has chosen to sign with the Jets,” said Executive Vice President and General Manager of the Jets, Kevin Cheveldayoff. “Brandon enjoyed a tremendously successful collegiate career at Providence and will bring a combination of high end speed, energy, and physicality that complement the identity of the Winnipeg Jets. We have been consistently impressed by Brandon’s pace of play, his competitive level night in and night out, and his ability to get on the puck.  Brandon’s game fits that of the Winnipeg Jets nicely, and we are excited to add a player of his ability to our organization.”

The Toronto native is the younger brother of Vancouver Canucks’ defenceman Chris Tanev who played part of one season with the Manitoba Moose while they were the Canucks’ AHL affiliate.