The Jets and Anthony Peluso agree to a two year deal.

In July of 2013 the Jets gave then RFA Anthony Peluso a two year deal and today they signed him for another two years with the club.  He played in 49 games for Winnipeg last season registering one goal and one assist while compiling 86 penalty minutes. 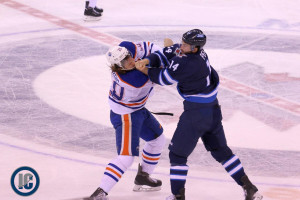 The Winnipeg Jets are pleased to announce they have agreed to terms with restricted free agent forward Anthony Peluso on a new two-year contract worth an AAV of $675,000.

Peluso, 26, completed his third season with the Jets appearing in 49 games, registering one goal and one assist to go along with 86 penalty minutes. Peluso was acquired off waivers by the Jets on January 6, 2012.

The North York, ON native has played 107 NHL games, all for Winnipeg, tallying three goals and nine points along with 165 penalty minutes. He was originally drafted by the St. Louis Blues in the sixth round, 160th overall, in the 2007 NHL Draft.