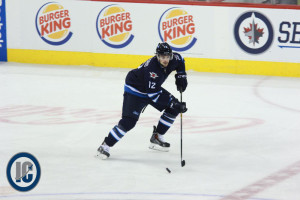 Drew Stafford had 21 goals in 78 games last season for the Jets but his production this year has decreased significantly along with the number of games he has played due to injury.  In 39 games with Winnipeg this season he has four goals and eight assists.

However he will be a UFA at the end of the season and with the trade deadline upcoming he was seen as someone who may garner some interest from a playoff team.

Jets are getting calls on Drew Stafford, could see him getting moved before deadline. UFA after this season, lots of forwards in Winnipeg.

With young forwards like Andrew Copp, Marko Dano, Joel Armia not to mention Kyle Connor, Jack Roslovic, Brendan Lemieux and Chase De Leo down with the Moose the veteran forward may well find himself in different colours come this time next week.

NHL skills coach Tim Turk on Winnipeg Jets rookie Patrik Laine
Off the Post: State of the Jets – Two superstars, sure, but what else?