The third year pro is back in the NHL. 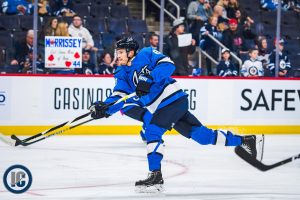 It has been a tough first half of the 2019-20 season for Mason Appleton who played in nine games (0 goals 0 assists) with the Jets to start the season but was a healthy scratch for a pair of games before a freak injury ahead of the Heritage Classic in Regina cost him six and a half weeks of recovery time.

When Appleton was ready to return to action he found himself sent down to the AHL to get some playing time with the Manitoba Moose.

Appleton has played in four games for the Moose this season picking up one assist.

The Wisconsin product will have to hope that his path will be similar to the one skated by Adam Lowry in 2015-16 (4 games) and Andrew Copp in 2016-17 (8 games) who found themselves down in the American League before returning full-time to the NHL.