A recall and injury news. 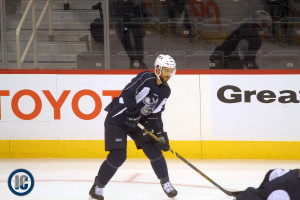 Coach Maurice announced this morning that Mark Stuart won’t play against the Washington Capitals tonight as he is day-to-day with a lower body injury following pre-game skate.  The team has recalled Julian Melchiori from the Manitoba Moose who has been his steady self while playing down on the farm with the Moose.

Melchiori was the name you could expect to be recalled when the Jets needed some blue line help.  He has one goal and three assists in the eight games that the Moose have played this season.