Jets recall six from the Moose.

With the Manitoba season coming to a conclusion on Sunday the Jets have recalled six players up to the big club to join the Black Aces. 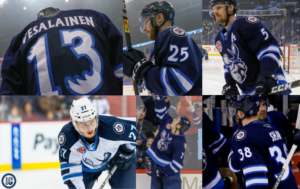 Before you ask “why not Tucker Poolman?” it is because he has been out of commission since the end of March when he collided with Klim Kostin of the Rampage in San Antonio.  He is currently in a walking boot and said during exit meetings on Monday he expects it to be a couple more weeks before he is ready to be active again depending on how it heals.

Mason Appleton has had a great second year as a pro getting into 36 NHL games with the parent club this season when they had injuries and then contributing in a big way with the Moose.  He ended up with 15 goals this season with Manitoba in 40 games and I believe seven of his goals were game winners.

It has been a busy year for Jets prospect Kristian Vesalainen who started with the Jets, went to the Moose, went over to the KHL, came back to the Moose and is now up with the Jets.  In 22 games with Manitoba this season he had four goals and nine assists.  His most impressive goal was this OT winner at Bell MTS Place.

Another guy who has had a few different uniforms this season was Marko Dano who started with the Jets and was claimed on waivers by the Avalanche.  When they attempted to send him to their farm club the Jets claimed him back and he was assigned to the Moose.  His strength was a valuable resource for the AHL club and he finished with 12 goals and 18 assists for 30 points in 51 games with the Moose (his highest AHL total to date).

Winnipeg signed Logan Shaw back in November to add some scoring depth and boy did he ever do that for the AHL club scoring 27 goals (along with 19 assists) in 63 games for the Moose.  He was a critical piece of the Manitoba top line and top power play unit.

Prospect Logan Stanley really saw an increase in responsibility during his rookie season back in the early part of the season with the Jets recalling a number of D men and the Moose dealing with injuries.  At one point he was playing close to 30 minutes a game for the AHL affiliate of Winnipeg.  While he still will need some seasoning in the AHL the prospect definitely grew as a player between game 1 and game 76 of the season.

Last up is veteran D man Cam Schilling who hadn’t played an NHL game since back in 2014-15 with the Capitals.  Injuries up top gave him the chance to get into four games with the Jets this season which included his first NHL point.  And he was a player mentioned by Jets bench boss Paul Maurice as someone from within the organization that could be called upon if needed.  He was certainly relied upon at the AHL level by coach Vincent and his staff playing 64 games and contributing six goals and 23 assists as well as being relied upon to provide leadership on and off the ice.

These six will join goalie Eric Comrie who was recalled on Monday as the Jets look to go deep into the playoffs.  They’ve made a heck of a series of it to date after starting down 0-2 and then winning both games in St. Louis to tie the series at 2.  Game 5 goes tomorrow night here in Winnipeg at 7:30 pm.