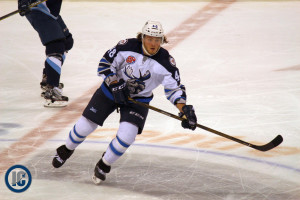 The last piece of the puzzle has fallen into place as we learned today that the Jets have re-assigned Brendan Lemieux to the Manitoba Moose.  The Jets NHL roster is now set at 23.

Lemieux was seen as a player who could have been in the mix for a role with the big club but an injury in the Young Stars tournament in B.C. cut his camp short and now he will have to fight for his opportunity to make it to the Jets from the Moose.