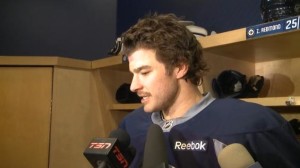 Zach Redmond – How did his first game back feel?  Did the game have a special meaning?  Tough to sit and watch and then thrown into the game?  Being ready for a back-to-back.  Facing a younger, less structured Flames team.  Getting the team back on track.

Keaton Ellerby  – Gaining coach’s confidence. Jumping in with the team.  Struggles in the Central Division.  Concern for weak record against Central?  How tough is it to stick to the game plan?  Perfect situation for him to take advantage?

Mark Scheifele – Comment on last night’s game.  How does he feel about the effort?  What has he seen from this team over past two weeks?  What does he know about the Flames?  Keys to being balanced.  Has he been able to leave games behind rather than dwelling on them?  Has the team found consistency?  Does it go beyond effort?

Mark Stuart – Injury update.  Optimistic that he can return this week?  Is it more of a conditioning aspect or contact?  Rush to get back in.  Concern about losing spot?