Prior to departing on their three game road trip Jets hit the ice at MTS Centre for a skate. 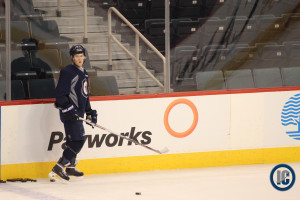 It had previously been left as “to be determined” by the coaching staff as to what the plan of action for today would be but after last night’s stinker against the Habs it should come as little surprise that the players skated prior to departing for Arizona.  All are present and accounted for with the exception of Ben Chiarot according to Brian Munz of TSN 1290 Winnipeg.

Dustin Byfuglien:  On the type of reaction they expect from the team tomorrow.  What troubled him most about yesterday’s game?  On the team having to be willing to pay the price to play an NHL game.  On the importance of the next game.  How did he feel about his play?  Anything he’d like to have back?  Was that the worst performance of the year?  Hard to play a game like that behind you?  Is the team too comfortable?

Bryan Little:  An uptempo practice this morning.  After a performance like last night, do you come into today with some uncertainty?  On the team having to be willing to pay the price to play an NHL game.  Why does he think it is and what questions does it raise in his mind?  Have things gotten comfortable?  On what to expect from the Coyotes.

Shawn Matthias:  Was this the type of practice he expected?  After a performance like last night, do you come into today with some uncertainty?  Has he wiped yesterday from his mind?  On the errors they made.

Coach Maurice:  How did he manage the displeasure he felt yesterday and how did he feel today?  Update on Chiarot. Was there a time in his coaching career when he would have come back with a punishment type skate tomorrow?  On the team’s willingness to pay the price.  How does that happen and what do you do?  Bouncing back from poor performances.  Approaching the Coyotes after they’ve had a long rest.  On Patrik Laine.  What will give him an indication of his team’s response early on in tomorrow’s game?  A fine line between leaving a game like last night’s and moving forward?