The Jets were back on the ice following the holiday break and a win in Chicago. 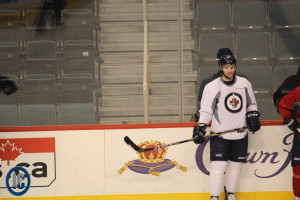 The Jets were back on the ice in Winnipeg today following the holiday break and a win last night in Chicago.

Blake Wheeler:  Reflecting on last night’s win.  On confidence in the Jets room.  Does he share the surprise around the league in what Columbus has been able to achieve?  Do they get fired up being the team trying to end the Blue Jackets streak?  Any thoughts on how the Jets have historically been successful following the holiday break?  On the roster moves made today and where the room stands.

Drew Stafford:  On being able to contribute.  On his current role with the team.  Thinking about his role reduction.  Playing with Nic Petan.  On what Columbus has been able to do this season.

Mark Scheifele:  On being asked to be in the Nutcracker.  Has he ever done anything like this before?  What does he know about it?  Any practice?  Getting out of the comfort zone.  How hard will three in a row be when going up against Columbus?  Have the Blue Jackets surprised him?  On having the confidence to knock off a top team like Columbus.  On what the Christmas break meant for him.

Paul Maurice:  Update on Patrik Laine?  On the roster moves made today.  Where is the confidence now compared to when they arrived home following that long road trip?  The Lowry line doesn’t appear to have missed a beat.  Did his team surprise him at all last night?  Is Drew Stafford’s role simply about production?  On Laine not warming up “right”.  Progression of Jacob Trouba since he came back to the team.  What it means to the team when Trouba is playing like this.  On the Jets responding to challenges.  Status quo with Tyler Myers?  Comparing Trouba on right to him on the left.  On Byfuglien letting up on some of his big hits.  Was last night a statement game from Hellebuyck?