A report from the MTS Centre. 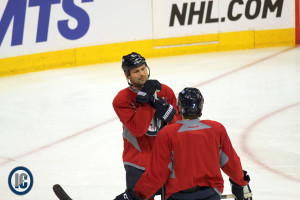 Via Brian Munz of TSN 1290 Winnipeg we get this report of players taking part on the ice in the clearly optional skate today at the MTS Centre:

Bryan Little:  Reflections on last night’s loss.  Excited for the challenge presented by the Rangers?  Last night how far were they from matching their games from the weekend?  Any theory on the inconsistency?  On being able to secure a point.  On Laine shooting at 22% and whether it is sustainable.  Where would the team be without Laine?  Sense that other team’s are fearing Laine?  Laine being able to do this as an 18 year old.

Jacob Trouba:  On his usage and it being the type of arrangement he wanted all along.  Is he surprised that he is getting this opportunity?  In order to keep it long term does he need to grab it now?  Does he worry about what happens when everyone is healthy?  How does he feel right now (in terms of his play)?  Does he expect to be more offensive or will this be his style of play?  Doesn’t care too much about numbers?  How does he feel about where the team is right now?  On the team being consistent.

Patrik Laine:  Mood in the room following the shootout loss.  Lesson learned about maintaining a lead.  What does he expect from the Rangers?

Paul Maurice:  Status of Mark Scheifele.  Any theory/reason why they couldn’t duplicate the weekend effort last night?  Not generating anything in the 3rd period.  How long should it take before we recognize what this team’s game should look like?  On Patrik Laine shooting 22%.  On Laine’s level of accuracy.  Is Laine’s shot consistent?  Laine being able to accomplish what he has done at 18.