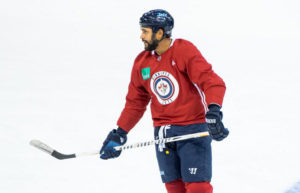 The Jets were off yesterday following their 5-2 loss to the Stars on Monday night.  Today they will practice as they get ready to face the Islanders here tomorrow night.

As per Mike McIntyre of the Winnipeg Free Press it appears that Dustin Byfuglien is celebrating his 34th birthday with a return to a normal coloured practice uniform as he sheds the yellow non-contact for the red normally worn by the Jets active D men.  According to Jamie Thomas of Jets TV it looks like line rushes remain the same as they were last game against Dallas.

Coach Maurice:  Thoughts on Dustin Byfuglien’s practice.  Would position in the standings ever impact these decision (having clinched a playoff spot)?  Who would he slot in alongside?  Is Hellebuyck peaking at the right time?  Does he have an issue with “the code”?  Anything new with Brossoit?  Status of Morrissey?  What is different about the Islanders?  On the Islanders lack of scoring but ability to still win.  More on “the code”.  Thoughts on Andrew Ladd.

With Dustin Byfuglien in a normal uniform coach Maurice was asked if he could play tomorrow night against the Islanders “well take a look and see how he’s feeling tomorrow.  I don’t have him in the lineup for tomorrow night.  We’ll get another good one in the next day and see where he’s at.”  The Jets bench boss was also asked about goalie Laurent Brossoit “Skated this morning.”  Asked if he would be available tomorrow  “He’s not going to backup tomorrow.”  Lastly he also indicated that Josh Morrissey was skating this morning.

The Jets play the third game of this homestand against the Islanders tomorrow night at 7 pm. Be sure to keep it locked to illegalcurve.com for the AM Papers which go live at 7 AM followed by our pre-game report at 10:30 AM.