Check out the latest from today’s optional practice in Winnipeg. 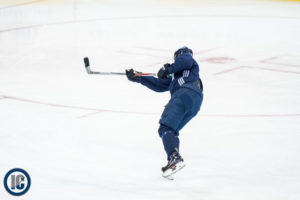 Following a tough 4-1 loss to the Avalanche last night the Jets were scheduled to hit the ice as they get set for the Senators to finish off this three-game homestand.

As per Mike McIntyre of the Winnipeg Free Press “Joe Morrow will be out 2-3 weeks with a lower body injury suffered in a late-game scrap last night.”  I would be inclined to think that Tucker Poolman will be the defenceman recalled from the Moose. Poolman has been playing his best stretch of pro hockey (six game points streak aside). Sami Niku, who was just recently returned to the AHL club, needs to be playing big minutes (since Jan 1st he has only played six games with the Jets and three games with the Moose).

The Jets play the Senators tomorrow night at 6 pm. Be sure to keep it locked to illegalcurve.com for the AM Papers which go live at 7 AM followed by our pre-game report at 9:30 AM.