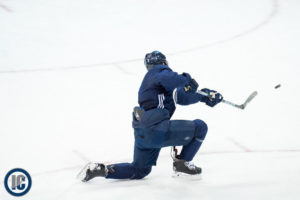 The Jets are coming off a tough 4-0 loss last night to the Penguins in Pittsburgh but they’ve got no time to dwell on things with a hot Dallas Stars team here on Sunday followed by another Central Division matchup against the Avalanche here on Tuesday.  Of course the big questions of the day will be the status of Nikolaj Ehlers and Dmitry Kulikov.

As expected no Nikolaj Ehlers on the ice for the Jets today according to Brian Munz of TSN 1290 Winnipeg who outlines the lines being used in practice below.

Coach Maurice has indicated that Nikolaj Ehlers will be out until early to mid February with an upper-body injury.  He also confirmed that Dmitry Kulikov is fine after the veteran defenceman left the game in Pittsburgh with two minutes to go after blocking a shot.

? Patrik Laine on switching sides on the wing, playing with Little and Roslovic, and more. pic.twitter.com/AuQ7N3EM2z

? Bryan Little speaks on Roslovic’s development, how his line will look in Ehlers’ absence, and more following this afternoon’s practice. pic.twitter.com/tQEyi7LmVU

? Jack Roslovic on stepping into the top six, playing with Bryan Little, and more after today’s skate. pic.twitter.com/UJQSTkX1oE

Coach Maurice scrum topics: Status of Nikolaj Ehlers.  On moving Jack Roslovic up to the 2nd line.  On moving Patrik Laine to the other side of the ice.  More on the reason behind Jack Roslovic moving up in the lineup.  Has he noticed a progression with Roslovic off the ice?  On losing your fastest player and how it impacts his desire for the team to play fast.  On the lack of Jets offence.  On being selected to the All-Star game.  Status of Dmitry Kulikov.

The Jets face the Stars tomorrow at 4 pm CT in Winnipeg.  Be sure to keep it locked to illegalcurve.com for the AM Papers which go live at 7 AM followed by our pre-game report at 10:30 AM.