Check out the latest from the Jets practice at Bell IcePlex. 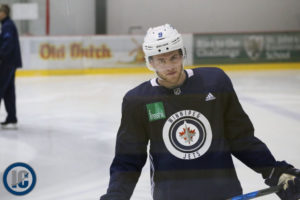 The Jets are back on the ice after having lost two in a row for just the second time this season (and in an odd quirk of fate it was also to the Flames and Wild back in November).  They will practice at the IcePlex before heading to Edmonton to close out 2018 with a New Years Eve contest against the Oilers.  Edmonton is coming off a disappointing 7-4 loss to the Sharks last night and currently sit four points back of the second wild card spot.

As expected no Dustin Byfuglien according to Ted Wyman of the Winnipeg Sun.  Ted also indicated that Tyler Myers wasn’t at practice.

Coach Maurice:  Status of Dustin Byfuglien.  Update on Tyler Myers?  Will they take anyone to Edmonton with them?  How does Joe Morrow approach the game after being off for a month?  On splitting the Trouba and Morrissey duo.  Is the Appleton/Lemieux swap likely for tomorrow?  Did he have to do something differently in practice today after saying he didn’t prepare the team properly in the last practice?  Any insight into the starting goalie?  Further clarification on Byfuglien.  Reflections on 2018 and going in the right direction.  Is he getting tired of facing teams that are desperate/on a losing streak?  On the depth in the organization allowing the “next man up” mentality to work.  Does he know Tucker Poolman’s status?

Of course the big question was the status of Dustin Byfuglien who left the game in the 3rd period.  Coach Maurice had this to say “He’s out and he’s gonna be awhile.  So we’ll give you probably the next update until after the All-Star break.  And then they’ll be a window there.  No surgery, just a flesh wound and he’ll be out for awhile.”

Obviously the Jets will recall a D man from the Moose who play the Eagles this afternoon at Bell MTS Place.  As I noted on twitter today all the healthy Manitoba defencemen including Niku, Schilling, Nogier and Stanley were on the ice for pre-game warm up.  Looks like either the Jets will recall a player after the game and he will catch a flight to Edmonton or they will wait until later in the week because they don’t play again (after tomorrow) until Friday in Pittsburgh.

The Jets face the Oilers tomorrow at 8 pm CT in Edmonton.  Be sure to keep it locked to illegalcurve.com for the AM Papers which go live at 7 AM followed by the Jets pre-game report at 10:30 AM.  The Jets take to the ice for morning skate at 12:30 pm CT.