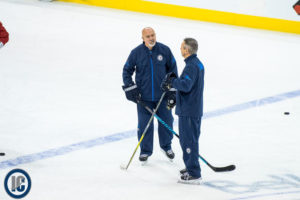 The Jets will try to forget last night’s 4-3 regulation loss to the Penguins as they switch focus to a divisional opponent in the Chicago Blackhawks who will play here tomorrow night.

According to Jamie Thomas of Jets TV Andrew Copp is wearing a yellow non-contact uniform.  He also adds that Mark Scheifele, Dustin Byfuglien and Joe Morrow are not skating.

Coach Maurice:  Updates on Byfuglien, Scheifele, Morrow and Copp.  Was Byfuglien in concussion protocol?  On 3rd period leads and more minutes for the 4th line.  On the process of the spotter pulling Byfuglien.  Byfuglien was not diagnosed with a concussion?  How does he compute that with the way Byfuglien reacted on the ice?  Why wasn’t Byfuglien practicing today?

Laundry list of players to discuss today for Jets head coach Paul Maurice: “Buff felt good last night after the game.  Felt good this morning but we still monitor those things.  We’ll see how he’s doing tomorrow morning.  Scheif we’ll put him on the ice and expect him to play.  Morrow the same.  Andrew Copp will skate in the morning skate tomorrow, take full contact, assuming he gets feeling good through today, see how he comes back in the morning, we’ll go full contact on Friday and if he gets through that he’s available to be a player for us.”

As you can see about a big focus of today’s availability with coach Maurice was regarding Dustin Byfuglien.  In case you missed the play Byfuglien went to throw a big hit on Jamie Oleksiak, who himself is a big boy, and the Jets big man was clearly stunned on the play (replay shows he may have been caught by Oleksiak’s helmet). If you didn’t see the play here it is:

Today coach Maurice was asked about the concussion protocol in the game last night after Byfuglien was pulled from the game by the spotter.  He indicated that the NHL ran the protocol and 33 passed the test. The Jets coach confirmed that Byfuglien was not diagnosed with a concussion.

The Jets announced that they have recalled Cameron Schilling from the AHL and placed Andrew Copp on retroactive IR.  For those wondering why Tucker Poolman didn’t get the call he was injured on Friday night in a Moose game against the Iowa Wild and will be out for the foreseeable future.

The Jets will face the Hawks tomorrow night.  Morning skate gets underway at 10:30 AM and puck drop is at 7 pm.