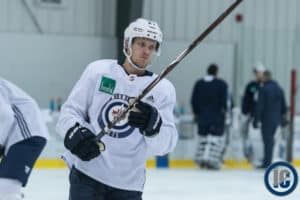 The Jets are back on the ice today at the IcePlex following their big 5-2 win over the Avalanche last night to kick off the four-game home stand.

As expected no Dmitry Kulikov on the ice for the Jets today following the 1st period injury he suffered according to play by play voice on TSN 1290 Winnipeg Paul Edmonds who also supplies the lines & D pairs below.

Coach Maurice:  Reflecting back on his decision to match the Mark Scheifele line up against the Nathan MacKinnon. On the Jets top line ability to smother opponents and also be dangerous.  Update on Kulikov.  On Kulikov’s play just before the injury.  On who they may recall?  On the lack of recognition that Wheeler fails to garner across the NHL.  On Laine’s ability to be less of a static player on the power play and how its allowed the PP to get even stronger.  On his decision to have Blake Wheeler in the Nicklas Backstrom spot.  Was Wheeler open to adjusting his spot on the power play?  On Kyle Connor’s ability to get to get side-to-side in the low position.  How important are the 2 on 2 they do at the end of practice?  Goalie plan?  Is surgery an option for Kulikov?

After leaving the game in the 1st period the status of Dmitry Kulikov was uncertain and Jets head coach Paul Maurice confirmed today “he’s out at least a month and it may be longer than that.  That would be the first open window.  Probably the next time I give you an update it will be four weeks from now.”   When asked if surgery was an option the Jets bench boss said “No.  No it’s just gotta heal.”.

Coach Maurice did confirm that Connor Hellebuyck is back in net for tomorrow’s game against New Jersey.

Jets face the Devils with AM skate getting underway at 9:30 AM at Bell MTS Place and puck drop at 6 pm.