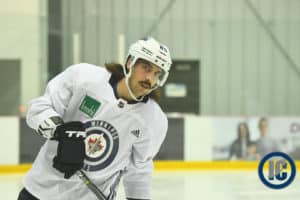 The Jets are back on the ice after returning from Finland yesterday.  They will practice today as they prepare to face the Colorado Avalanche here on Friday night as they kick off a four-game home stand at Bell MTS Place.

All players are present and accounted for today at the IcePlex.

Coach Maurice:  Did he get done what they wanted to in today’s practice?  Is he acclimatized back to Winnipeg?  How does he approach the next three or four days?  How difficult was it for player’s who didn’t adjust to being in Finland?  How would he rate the experience of being part of the Global Series?  His thoughts on Laine’s performance in Finland?  Was going to Finland weighing on Laine?  On Laine dealing with the pressure/distractions but comes up big.  On trying to smuggle Laine’s family back.  Status of Brendan Lemieux?  How did he think Petan handled himself on Friday?  Is there a temptation to move Laine to the top six?

The Jets are off on Monday.