Check out the latest from the Jets practice in Winnipeg. 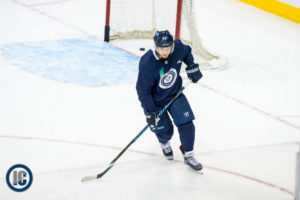 The Jets are coming off a disappointing 6-5 loss to the Predators last night but they will have to put it out of their mind as they practice today in advance of a Friday night date with the Red Wings.

According to Jaime Thomas of Jets TV the only players not skating today are Connor Hellebuyck, Bryan Little and Tobias Enstrom.  Last night following the game coach Maurice indicated this about Enstrom, who was originally projected to play against the Predators but was a late scratch, “(his status) changed when he came in today. ” The coach suggested the veteran Jets defenceman was “day-to-day”.  We won’t get an update today however as coach Maurice isn’t scheduled to speak following practice.

As you can see below the lines & D pairs are sans Little & Enstrom and come via Paul Edmonds of TSN 1290 Winnipeg.