Latest from the Jets practice in Winnipeg at Bell MTS Place. 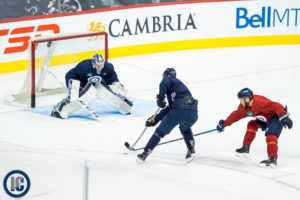 Jets are back in action today at the Bell MTS Place as they prepare to face the Sharks here in Winnipeg tomorrow afternoon.

According to Jamie Thomas of Jets TV the only Jets missing from today’s skate were Matt Hendricks, Adam Lowry and Tyler Myers.

Tobias Enstrom, who has been out since November 18th (23 games) is set to make his return to the Jets lineup tomorrow according to coach Maurice.

? Enstrom in, Hellebuyck to start, and more from Coach Paul Maurice ahead of tomorrow’s matinee matchup against the Sharks. pic.twitter.com/FWfLoofwpl

Scrum topics:  Enstrom status.  Byfuglien’s usage.  Status of Lowry, Hendricks and Myers?  Thoughts on the Sharks.  Hellebuyck starts tomorrow?  How did he feel about the Jets game last night?  On the environment.  Does he use past games against Buffalo as motivation?  Byfuglien’s displeasure at his minutes, how does he express that to the coach?  On the team success at the penalty kill, what does he attribute this to?  Thoughts on Chiarot’s body of work. On Joe Thornton losing facial hair.