Latest from the Jets skate at the MTS Centre. 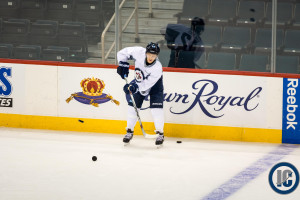 The Jets were off yesterday and a small contingent of players hit the ice this morning for a skate ahead of tomorrow’s game against the Minnesota Wild here in Winnipeg.  We did learn following skate about a number of players who are injured including Shawn Matthias who requires surgery and is done for the season.

Adam Lowry:  How he has seen his game progress this year.  Seeing the work in practice get rewarded in a game.  Where is his confidence level right now?  How can they beat the Wild for the first time this season?

Mark Scheifele:  On how they ended the road trip.  On the Jets response to goals against in the Islanders game as they have “matured” this season.  On what he has seen from the Wild.  On the play of the Jets patchwork defence.  On defence keeping it simple.  Little more motivated to play against a Wild team that has beaten them four times? Putting on the retro jerseys.

Coach Maurice:  On what he has seen in Adam Lowry’s game.  On the importance of Lowry down the middle.  Injury updates.  What has he liked from Melchiori?  What are the keys when the lineup gets depleted?  Little more motivated to play against a Wild team that has beaten them four times?  On Nic Petan finally scoring but having it called back.  Brian Strait will play tomorrow?  On Patrik Laine.  On the season Matthias had for the Jets.