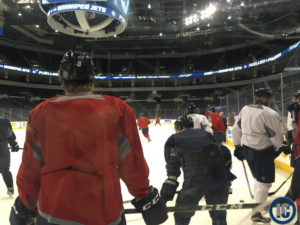 On trade deadline day the Jets still held a practice today and I was down at the MTS Centre.  All players were present and accounted for on the ice.  Lines and D pairs looked like this:

Blake Wheeler:  On trade deadline day and whether he’d like to see new players brought in.  What is the mood like right now in the room?  How hard is it to get up off the mat after that loss?  On why team defence seems to be the Jets Achilles heel.  On the frustration not being able to keep puck out of the net.  Is the problem mental?

Patrik Laine:  On winning NHL rookie of the month.  Does he feel like it didn’t take long to get back into the swing of things post injury?  Has he thought about scoring 40?  Does he think about the Calder race at all?  Why is it so hard to play team defence? Does it feel like the Jets are making any progress?

Mathieu Perreault:  On the work in practice.  His thoughts with respect to the trade deadline.  On the Jets team defence.  What is it like waiting for the 2 pm deadline?

Connor Hellebuyck:  On the progression of his game.  On his expectations.  Does he think he needs more seasoning to raise his level?  A game like last night doesn’t deter him?  What is the biggest challenge to handling the number one role at the NHL level?  How much of a challenge is it to erase the outside noise?  What is in his mind when he gets pulled?  Are there goalies he likes to watch?  More on merging his style with what he sees from around the league.

Coach Maurice:  Any trade updates?  What does he do to make it easier on his players today?  Specifically Perreault/Stafford?  What is the biggest challenge for a young goalie to establish himself as a number one?  How does he think Hellebuyck handle these challenges?  What is the biggest asset of Hellebuyck’s game?  Was yesterday a matter of rust or underlying problems?  Copp and Dano still options for Friday?  On goalies needing to be older to be more established and how does it apply to Hellebuyck?  Have they re-thought their decision from training camp, was Hellebuyck rushed?  Update on Myers.  What is his mindset on how many players he’d like to keep around with guys getting healthy?  On Patrik Laine being named NHL rookie of the month.  On his motivation to win the Calder or score 40.