Hear from the Jets following the skills competition. 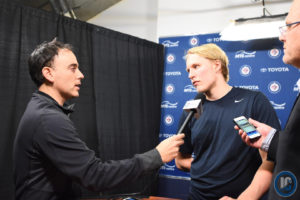 Following the Jets Skills Competition we spoke with a couple of Jets players.

Patrik Laine:  On what would have happened if he used Byfuglien’s stick.  On the difference in flex between his and stick.  On his accuracy shooting.  Does he ever really use a “big” slap shot in a game?  Getting to interact with the fans.  Did he think his hardest shot would hold up against Byfuglien?

Chris Thorburn:  Is it an event he looks forward to?  Is it a fan thing or a camaraderie with teammates?  On getting to relax in a public way?  Does he have a formula for his success?