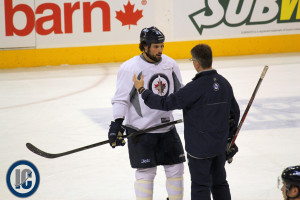 Zach Bogosian – Ready to play?  Pushing hard to get back into game shape.  Does the scenario matter when he gets back into the lineup?  How would he describe the season for himself thus far?  Fresh start?  How comfortable is he with Enstrom?

Tobias Enstrom – How do he and Zach Bogosian compliment each other?  Is there much of an adjustment going from Buff or someone else to Zach?  How does he feel about his game the last little while?  His point production being down since the first ten games.  What areas does he specifically want to address?

Mark Stuart – Tough sledding for his team in the West.  Did he anticipate it would be that difficult?  Have they forgotten the 3rd period in Buffalo?

Mark Scheifele – What is going right for him personally?  Just building on the small things?  Does he feel like he has hit a new level of confidence?  Getting more minutes an example of the increased confidence in him?  Maintaining his focus.  More fun when you are scoring.  What does this team have to do to get over the hump?  Is the 1st period tomorrow night best chance to jump on a tired team playing 2nd game of back-to-back?

Bryan Little – Talking about where the team sits and what they need to do prior to the break.  Talking to fellow players and working through the problems.  Dealing with a variety of coaches.  Has he ever thought Coach Noel was ready to burst a gasket?  Breaking the pattern.