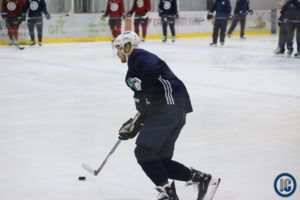 The Jets are on the ice today to get ready for game 5 of their series with the Wild as they look to close things out with a 3-1 series lead.  Many questions still abound with respect to the health of the team including Tyler Myers, Tobias Enstrom and Mathieu Perreault.  Ron McLean on the CBC broadcast last night did indicate that he had heard that Myers would be good to go for Friday but we will have to wait for tomorrow’s morning skate I suspect before we find that out.

Sami Niku was recalled from the Manitoba Moose.

As per Mike McIntyre of the Winnipeg Free Press neither Tobias Enstrom or Tyler Myers is on the ice for today’s practice.  Line rushes (listed below) via Jamie Thomas of Jets TV who has also indicated that Adam Lowry isn’t skating today. D pairs via Scott Billeck of NHLcom.

Coach Maurice:  How does deployment change without Morrissey?  Will he run top 4 heavy?  Is he ruling Tyler Myers out?  Did Myers skate?  On his message to Sami Niku (if he was to play).  On Niku’s confidence.  Any theory as to why young players aren’t phased by the stage of the playoffs anymore?  Did Enstrom skate today?  How did Morrissey handle the suspension?  How strongly does he disagree with the league’s decision?  Didn’t come to any different understanding after watching the hit again?  Would he have any concern that Morrissey will alter his game as a result?  How big a hole does he leave in the lineup?  Impact Laine has had on the series.  On Ehlers game.  Not being completely healthy at any time.  Status of Matt Hendricks.

When asked if he was ruling Tyler Myers out for tomorrow’s game coach Maurice indicated “I wouldn’t rule anybody out” which is about as much as you can expect from the Jets bench boss during the playoffs.  Coach Maurice did acknowledge that neither Myers nor Tobias Enstrom skated today.  When asked if Matt Hendricks could be an option this is what Paul Maurice had to say “he’s out of the gold and into full contact”.

The Wild are skating in Minnesota this morning before leaving for Winnipeg.  Sarah McLellan of the Minneapolis Star Tribune has the lines and D pairs as follows: