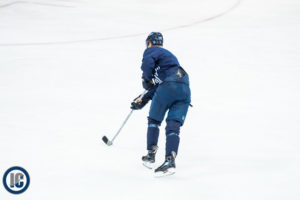 The Jets won’t have much time to bask in the ambiance of the first playoff win in franchise history as they prepare to face the Wild tomorrow night in downtown Winnipeg.

The big question today will be the heath status of Mathieu Perreault who was on the receiving end of a number of big hits in the 2nd period.  He took a massive neutral zone wallop courtesy of Wild captain Mikko Koivu and then on a subsequent shift took two more shots from Minnesota players.  He didn’t play in the 3rd period.  Another question mark is the status of Tobias Enstrom and whether he is ready to go.

Obviously no Mathieu Perreault on the ice along with a number of other Jets who are skipping the skate.  We will have to wait until after for an update on the Jets forward.

Coach Maurice:  Health Updates.  The Jets power play.  Importance of video during the series.  When did the power play dynamic change in the NHL?  Is being big “still OK”?  Is big and good beat small and good?  What does the hit Byfuglien laid on Eriksson Ek do for the team?  On the pinch that led to the Wild goal.  Has the philosophy changed about dumping the puck at an empty net late in a game?  Taking time and space away.  On the impact Byfuglien has with his defensive partner.  On adapting style of play.  Did he feel like they started getting to the middle of the ice?  Is there a comparison speed wise to Ehlers and how can that best be utilized?  Who is the fastest skater?  How much of the other NHL series will he be watching?  On Wheeler’s leadership and consistency.

Mathieu Perreault and Tobias Enstrom are “game-time decisions” for game 2 on Friday according to the Jets bench boss (which is about as much info as you can expect in the playoffs) although he was definitive in saying that Dmitry Kulikov and Matt Hendricks are out for game 2.