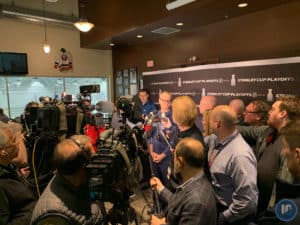 The Jets are back in business after flying home from Arizona on Sunday after concluding the regular season on Saturday night against the Coyotes.

It was a highly attended optional today to kick off the playoffs for the Jets.  Only players missing were Brandon Tanev, Dustin Byfuglien, Dmitry Kulikov, Bryan Little, Adam Lowry and Ben Chiarot.  Connor Hellebuyck was on another sheet of ice working with goalie coach Wade Flaherty.

Coach Maurice:  Any concern with the players who didn’t skate?  Status of Brandon Tanev?  What is he going to do with Josh Morrissey? Will he ease Morrissey right back into it?  Is it a straight swap with Morrissey and Beaulieu (and his overall game).  What’s his day like today and getting the team ready to focus on a singular opponent?  Is it different preparing for the Blues?  What did Connor Hellebuyck learn from last year’s playoff run?  On adapting to the emotional level of playoffs?  Does his team have a switch to flip now?  How would he describe Hellebuyck’s current game?  On his personality rising to challenge of the playoffs.  On the pressure goalies face in the playoffs.  What can they do psychologically to get into the head of a rookie goalie?  Does he feel like 55/26 are “back”?  On the play of Par Lindholm.  How much of this series is top line vs top line?

Coach Maurice indicated that Brandon Tanev is day-to-day and will not be playing game one.

According to Jeremy Rutherford of the Athletic St. Louis here are the lines and D pairs for today’s Blues practice.

The Jets will be back on the ice out at the IcePlex on Tuesday at 11 am.   Be sure to keep it locked to illegalcurve.com for the AM Papers which go live at 7 AM followed by Jets Playoff Practice Report once skate gets underway.