Winnipeg Free Press:  Jets re-sign D-man Ellerby for another season.  Melissa writes about the signing of Ellerby including quotes from a chat she had with the defencemen last night.

Winnipeg Sun:  Ellerby overwhelmed by support from hockey community after family tragedy.  It was a tragic event and it is good to see people rally to support him and his family.

Winnipeg Sun:  Jets prospects report.  With four drafts under the Jets belt Ken takes a look at the top five prospects in the organization.

Illegal Curve:  Jets sign Keaton Ellerby to a one-year, two-way contract.  There was some surprise that the Alberta product is returning to the fold after he and the Jets initially didn’t come to an agreement.  Here is the release from the Jets.

Chicago Sun-Times:  Glenview’s Matt Ustaski has NHL dream in sight.  A little more on the local Chicago prospect who was recently taken by the Jets this past June. 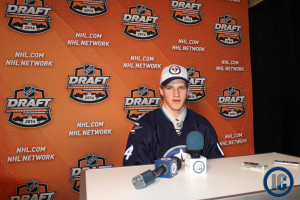 Hockey’s Future:  Winnipeg Jets draft review.  A look back at the selections made by Winnipeg in Philadelphia and gives you an assessment of each player selected.

Edmonton Journal: Oilers’ farm club hires Winnipeg Jets’ video man Tony Borgford to round out its coaching staff.  More on the role he will be fulfilling with his new team.