Winnipeg Free Press:  Jets draft mix of size, smarts.  In the interest in restocking the shelves the Jets added some more to the cupboards over the two days in Philly.  Do you like what you see?

Winnipeg Free Press:  D-man Glover a model of efficiency.  Meet Minnesota Nice as the Jets took the Minnesotan with their first pick in the 3rd round.

Winnipeg Sun:  Jets could be after Jussi Jokinen.  Ken talks about some of the guys that the Jets could be looking at in the free agent market.

TSN 1290 Winnipeg:  Clinston Franklin (audio).  Hear from the 5th round selection as he wasn’t at the draft but did speak to the guys on draft day.

You might not have been in Philly for the draft but we were and we have all the interviews with each draft pick that was in attendance as well as Jets GM Kevin Cheveldayoff. We had plenty of fun in Philly and managed to get done some work as well. 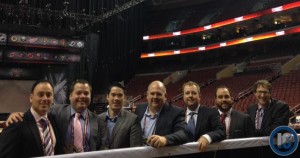 We’ve got both audio and video in each post.  Enjoy.

5th round:  Jets make a trade.