Note:  We have a new contest! Use the hashtag #Tims1st and @ tweet us @illegalcurve who you think the Jets will draft in the 1st round.  Or you can head over to our Facebook page and participate by adding a comment.  Each day, we’ll award prizes from Tim Hortons.  Ex.  @illegalcurve Haydn Fleury #Tims1st.

Note II:  Don’t forget that the entire IC crew will be at the Draft in Philadelphia so be sure to stay tuned to illegalcurve.com for all the latest Jets news from the City of Brotherly Love and follow us on twitter @illegalcurve.

Winnipeg Free Press:  Comeau believes Jets will score high with No. 9 pick.  Fans are hoping there may be some movement but fear not says the scouting staff if the team retains their pick at no. 9.

Winnipeg Free Press:  Decisions, decisions.  Fans are still waiting for GM Cheveldayoff to pull the trigger and in this article Tim reviews the five five most difficult decisions he has had to make during his tenure. 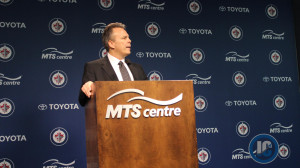 National Post:  Two weeks to fix a franchise 2014 – The Winnipeg Jets.  Michael Traikos takes a look at the Jets and the things the franchise needs to do to improve moving forward.  He looks at the moveable pieces, buyout option, cap crunch, what should happen, what shouldn’t happen, immediate needs, best-case scenario, worst-case scenario and post-script.