Sportsnet:  Jets considering role in summer ‘blockbuster’.  Missed this Mark Spector article from the other day discussing the possibility that the Jets may make a big move as we get closer to the NHL draft. 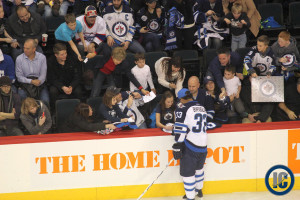 Hockey’s Future:  CHL prospects take home majority of Winnipeg Jets prospect awards.  Taking a look at some of the prospects that Jets fans have to look forward to in the future.

Illegal Curve:  Jets to hold 2014 Draft Party June 27th on event floor at MTS Centre.  For those not able to be down in Philadelphia the Jets are offering fans the opportunity to watch the draft at the MTS Centre including the opportunity to get pictures with Jets players and win gear.

Illegal Curve:  Jets 2013-14 Season in Review Guide.  The Jets have put out a PDF guide as they look back on the past season.

Winnipeg Sun:  Lowry, St. John’s IceCaps ready for Calder Cup final.  Ken gives us a look at one of the key Jets prospects in the system as young Adam Lowry looks to make an impact in his rookie campaign.