Hockey’s Future:  Top prospects’ graduations cause shakeup of Winnipeg Jets Top 20.  With Scheifele and Trouba graduating to the big time, check out the latest link of the Jets top prospects. 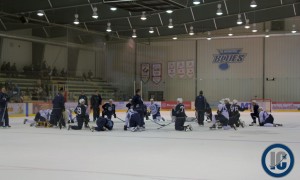 TSN:  Luongo and Noel added to coverage of NHL playoffs.  Count me as someone excited to hear these two on the panel.

TSN 1290 Winnipeg:  Hustler & Lawless (audio).  Listen to the audio from Gary’s sit down with coach Noel.

TSN 1290 Winnipeg:  The Big Show (audio).  Gary Lawless joins the boys of the Big Show to discuss his interview with the former Jets bench boss (which you can read below).

Winnipeg Free Press:  The first Noel: Ex-coach gives only interview since firing by Jets.  In case you missed it, Gary had an opportunity to sit down with the Jets former bench boss and ask him some questions.

AHL.com:  Samson named CCM/AHL Player of the Week.  The free agent signing back in 2013 had a nice conclusion to the 2014 regular season which earning him this honour.

TSN 1290 Winnipeg:  Hustler & Lawless (audio). IceCaps coach Keith McCambridge joined the guys to talk about the 2013/14 season and getting ready for the 1st round of the playoffs.

Guelph Mercury:  Storm blows away Otters.  The Jets third round pick in 2012 (70th overall) had a big night (1 G 2 A) as his Guelph Storm ripped Connor McDavid’s team to go up 3-0 in the series.