Note: Following today’s Jets Papers, you can ensure you are up to speed with our game set-up written by Ezra Ginsburg. Keep it locked to the site to get pre-game audio from the players and coach Noel. After the game, be sure to check us out for all the post-game reaction. As soon as the site is updated we notify you via twitter @illegalcurve and Facebook.

Winnipeg Free Press:  GOOD THINGS in small PACKAGES.  Enstrom certainly has a uniqueness about his game and while the points have slowed down over the past 20 games, coach Noel says while he would obviously appreciate an increase in points, that is not the measuring stick in which he judges the defeceman.

Winnipeg Free Press:  Zach’s back, but frustration is building.  Will be nice to see how his return impacts the team.  He plays an important role for the coaching staff and will ensure the Jets have another legit top four defenceman in the lineup.  Perhaps his return can coincide with a return of joy to joyland for coach Noel and the Jets.

Winnipeg Sun:  Jets have question in the crease but lean toward Pavelec.  Coach Noel wasn’t about to concede that there is a goalie controversy brewing (you can hear his comments below) but did acknowledge the last couple of times that he has been queried that the goal tending needs to improve.  He has usually followed this type of comment with the statement that the team as a whole needs to improve. 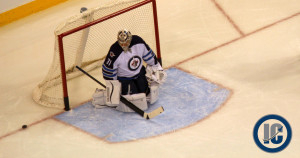 Winnipeg Sun:  Jets seem to be too comfortable with mediocrity.  Paul had a very interesting one on one chat with Blake Wheeler who gave some very insightful comments on the question of complacency in the organization.

Illegal Curve: Coach Noel post-practice scrum. Goalie talk for first four minutes of presser. Zach Bogosian talk. Scrutiny this team is under. Playing Buff with Pardy. Does he need points from Toby to feel like he is contributing? Getting Bogosian and his energy back on the bench. Getting another defenceman back who is capable of playing big minutes.

Illegal Curve: Winnipeg Jets Skills Competition: Sights and Sounds. 12,038 fans had a blast interacting with the Jets last night and we’ve attempted to capture some of the moments from the 2nd annual skills competition, including pictures, video and interviews with the players.

#FlaPanthers fans doing some cleaning this AM may want to leave the brooms out to cheer on the Cats tonight as they try to sweep Canada 4-0!

Florida Sun-Sentinel:  Panthers power past Senators.  The Cats from Florida are riding a five game winning streak and are coming in  hot to Winnipeg for tonight’s contest.  Will it be the cold or the second half of a back-to-back that slows down this squad from South Florida?

Miami Herald:  Florida Panthers back in hunt with Peter Horachek.  Just goes to show you what a different animal the Eastern Conference is this season.  Florida was way back and now are closing in a spot in the top eight.