Note: Tune into a special edition of NHL Mid-Week from 6-8 PM tonight on TSN 1290 Winnipeg as we break down all the latest news from around the NHL.  The show has moved from Wednesday to Tuesday as the Jets are playing on Long Island tomorrow night.  Guests:  Chris Botta (Sportsbuinsessdaily) and Arthur Staple (Newsday).

Note II:  The Illegal Curve team has been participating all month in Movember.  Ezra, Richard and I are growing our mustaches to help raise awareness and have collectively raised over $2000.  If you would like to donate to our team, here is a link.  Please note we will be hosting Snap the Stache tomorrow night at the Chill Bar and Grill.

Winnipeg Free Press:  Pavs knows what it takes to finish right.  He was solid throughout the game as he helped the team pick up a big win as well as accomplishing his 100th NHL victory.

Winnipeg Free Press:  True North and Jets scoring big at bank.  There is no question that this team has been a home run right from the start. 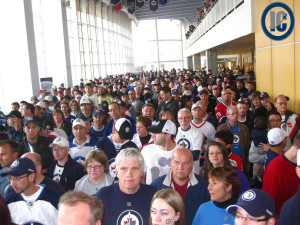 Winnipeg Sun:  Slump-busting night for Jets.  Kane was able and Scheifele was slick as both players broke out of big goalless droughts last night.

Winnipeg Sun:  Jets’ value rises significantly, according to Forbes list.  Doubling the value of the franchise isn’t too shabby.

Rogers:  Rogers Communications and NHL Announce 12-Year National Broadcast and Multimedia Agreement.  Here is the statement released by Rogers discussing the terms of the deal.

CBC:  CBC closes in on pricey deal with NHL to keep rights to Hockey Night in Canada.  Speculation was the name of the game and just when the night was coming to a close Bob McKenzie of TSN tweeted the following:

– “Pains me to report this, but NHL closing in on landmark CDN TV deal with two CDN networks. Many years (10+), many billions. ”

Jets on a Deadline: Jets 3 Devils 1
Jetting down to Florida? Panthers offering promo for Winnipeg fans