Note: Following today’s Jets Papers, you can ensure you are up to speed with our game set-up written by Ezra Ginsburg.  After the game, be sure to check us out for all the post-game reaction. As soon as the site is updated we notify you via twitter @illegalcurve and Facebook.

Note III: The Illegal Curve Hockey Show will be on TSN 1290 Radio, tomorrow starting at 12 Noon. Guests include David Pollak of the San Jose Mercury News discussing the Sharks, and Jason Arnott, who retired from the NHL earlier this week.

Winnipeg Free Press: Predators do it their way—Gary Lawless with a look at the stability and status quo that has governed the Predators since their inception.

Winnipeg Free Press: Waiver Wire Bonanza—Tim Campbell with a look at why the Jets have been very active in acquiring players via waivers, a phenomenon that has continued from the team’s days in Atlanta. 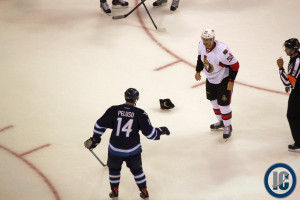 Winnipeg Free Press: Jets-Predators Game Preview—A brief preview of tonight’s contest, pitting two teams that are now quite familiar with one another.

Winnipeg Free Press: Beer-Bath Fall Out & Other Miscellaneous Items—Odds and ends from the  Jets world yesterday, including news on the Hawks apologizing for the actions of the Bonnie & Clyde of alcohol, Jets skills competition news, and Jim Slater under-going hernia surgery.

Winnipeg Sun: Trotz a Shining Example of Staying the Course—Paul Friesen with a look at the man behind the bench of the Predators, a man who has been there since day one of the organization.

Winnipeg Sun: Pardy Keeps a Sense of Humour About Chicago Incident—Where is Mike MIlbury when you need him? If anyone deserved to be beaten with their own shoe, it was those two drunken louts in Chicago. That is assuming of course they hadn’t previously sold their shoes for beer money.

Winnipeg Sun: Notes on Slater, Setoguchi, Montoya, and Filip Forsberg—A couple of miscellaneous news and notes about the Jets.

The Telegram: Rookies get some Grief, but it’s always Good Natured Grief—In light of the bullying/hazing firestorm in Miami with the Dolphins, Robin Short goes into the IceCaps dressing room to discuss appropriate teammate behaviour.

TSN: Florida Panthers fire Head Coach Kevin Dineen—From a hot coaching candidate to unemployment in the blink of an eye. The NHL coaching business is a cruel mistress.