Note:  Tune into NHL Mid-Week from 6-8 PM tonight on TSN 1290 Winnipeg as the guys break down all the latest news from around the NHL.  Guest:  Anthony SanFilippo (Reporter for PhiladelphiaFlyers.com).

Winnipeg Free Press:  Centres find faceoffs challenging.  While the team is bottom of the league in terms of ranking the good news after three games is they have two wins to their one loss and they can really only go up from here.

Winnipeg Free Press:  Bogo’s blunder ancient history?  No point tarring and feathering him.  What’s done is done and you can expect this will probably light a fire under the young defenceman. 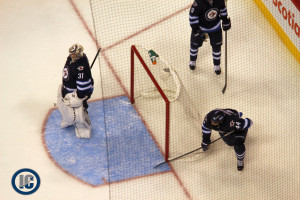 Winnipeg Free Press:  Expect the Jets and Wild to put defence first when rivals collide.   The Jets have spoken about being more defensively responsible so we shall see how they do in St. Paul.

Winnipeg Sun:  Stop the big shots.  Luckily for the Jets they have a few days to work on the areas they most need to improve on if they want to be serious contenders in the West.  They cannot keep allowing as many shots against Ondrej Pavelec and the thought of the day is collective responsibility.  A lot of 5 man unit talk.

Winnipeg Sun:  Trying to draw up new plan for winning faceoffs.  The Jets spent a lot of time working on faceoffs as they are sitting just ahead of Calgary in 29th spot in the league.  While it is still early this is one area in which the Jets need to vastly improve from Bryan Little to Jim Slater. 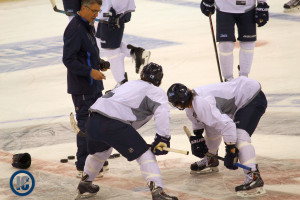 Winnipeg Sun:  Sports book likes coach Claude Noel’s odds of being fired.  There is a segment of the Jets fan base that would be only too happy to see the Jets bench boss get the hook.  However, I suspect that things would really have to really go awry for that to happen anytime soon.

Illegal Curve:  Coach Claude Noel practice scrum.  Focus of practice.  Shot differential.  Might we see Al Montoya this week?  Thorburn update (day to day, lower body to mid body).  Importance of division games.  Slow starts.  Work on faceoffs.  Would he like to get Matt Halischuk in lineup?  How much is goaltending responsible for where they are?

The Telegram:  IceCaps expect Pardy to be himself.  He brings experience to a young defensive core in St. John’s.

Minneapolis Star-Tribune:  Backstrom hurt as Wild lose in Nashville.  It was an unfortunate play as the Minnesota netminder had his former teammate Eric Nystrom hauled down and into him by his defenceman.  Result of the play was the injury and a penalty shot, which Josh Harding had to face coming in cold off the bench in relief.  Will keep an eye on things to see how this impacts their next opponent, which are your Winnipeg Jets.

San Jose Mercury News:  Rookie Hertl scores four in Sharks 9-2 win over Rangers.  It was an insane game in California last night.  The Sharks tossed everything they could at Lundqvist (26 shots, four goals against) and Biron (21 shots, five goals against).  The night belonged to 19 year old rookie Tomas Hertl who scored four goals, including this beauty.  Enjoy.