Note: The game against the Boston Bruins will be featured on TSN National and anyone can listen to the call on TSN 1290 Winnipeg.  Game time is 6:30 pm cst.

Note II: Reminder that following the Jets game, our comprehensive coverage jumps into action with post-game audio from both dressing rooms, coach Noel’s post-game presser as well as our podcast from the press box breaking down the game action.

ESPN:  Less travel, more competition.  On the negative side of things, four of the four ESPN analysts predict poor finishes for this team.  On the plus side LeBrun called Peggers’ the NHL’s best fans and the MTS Centre home of the loudest crowd.

Winnipeg Free Press:  Options for Jets lineup clear as mud.  You have Ladd, Little and Wheeler.  After that it becomes a bit murky.

Winnipeg Free Press:  Little, Ladd and Wheeler tuning up for another productive campaign.  Speaking of the aforementioned 1st line of the Jets, they are going to need to continue what they did last season if this team has any hope at the post season.

Winnipeg Free Press:  Making the most of opportunities.  Coach Noel obviously sees something in James Wright’s game that he likes and he is giving the speedy winger as many chances as he can to find success during this pre-season. 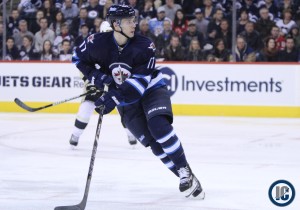 Winnipeg Free Press:  Ice getting thinner for final few.  Many are trying to prognosticate who will be left when the Jets produce their Opening Day Roster, but the players on the bubble aren’t showing their hands.

Winnipeg Sun:  Leafs-Sabres brawl still a hot topic with Jets.  Not a surprise that the skill guys and enforcers provided those responses.

Winnipeg Sun:  Coach Claude Noel turns up the heat.  Camp life cannot always be sunshine and lollipops.  Sometimes coach has to crack the whip to get his message through to the players and that is exactly what happened on Wednesday at practice. 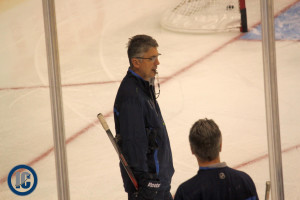 Illegal Curve:  Winnipeg Jets Promo nights.  From Dustin Byfuglien and Ondrej Pavelec bobblehead nights to a skills competition, there will be plenty of fun nights at the MTS Centre this season.

Illegal Curve:  Eddie Pasquale re-assigned to IceCaps.  The roster went from 27 to 26 yesterday as they sent down goalie Eddie Pasquale who turned some heads at camp this summer.

Illegal Curve:  Coach Noel training camp presser (audio).  Getting down to one group.  Injury update (Bogosian is day to day).  Will he be playing his likely 20 tomorrow night or does he still have to evaluate?  Tweaking his roster.  Factors for deciding blue line.  As a coach, does he prefer 2 extra defencemen or 2 extra forwards? Being able to have a regular training camp.  How many enforcers on this team?  Time to win now.  A more intense camp?  This is the year to get to playoffs.  Banff team building.  Value in playing a team like Boston at this point in the pre-season?  What got him fired up at practice today?

Boston Herald:  Niklas Svedberg’s turn to impress Claude Julien.  Looks like the Jets will be facing this young Bruins prospect in net tonight.