Update:  Practice audio from the players and the lines coach Noel used in practice.

Winnipeg Free Press:  Jets coach keeps the pressure on ahead of games against Boston.  Sounds like it was a fast-paced practice today at the MTS Centre today.

Winnipeg Free Press:  Questions remain, but Jets team of 2013-14 is coming together.  Ed looks at what we know but has been re-confirmed, what we’ve learned and what remains undecided.

Winnipeg Free Press:  Zinger has his finger on Jets.  You have to wonder how many people outside of Winnipeg even know that he was once the equipment manager with the Manitoba Moose?.  While he remains humble he continues to find success with the organization he has been loyal to almost his entire career.

Winnipeg Sun:  Joining the Pardy.  He had a bit of a rocky start in the game against the Senators but the Pardy is just getting started (that is never going to get old) as coach Noel gets more comfortable with using the defensively minded Newfoundland native in his roster. 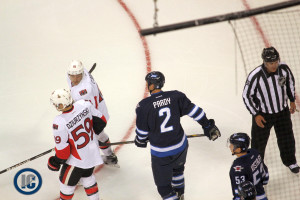 Winnipeg Sun:  Five position battles still raging in Winnipeg Jets training camp.  Ken breaks down five questions that are puzzling fans as we get closer and closer to the start of the season specifically; 1)  Who is the No. 2 centre? 2) Is Jacob Trouba ready? 3) Which D-man is on the way out? 4) Who is the enforcer? and 5) Which forwards seize the day?

CBC:  Elliotte Friedman’s 30 Thoughts.  Thoughts 21-25 of the influential column focuses on your Jets.  Specifically captain Andrew Ladd talking about Jets spending money, being more consistent, Cheveldayoff’s extension and reason for security (in part due to potential Seattle expansion) and the trade value of Paul Postma.

Illegal Curve:  Jets make 5 training camp cuts.  The Jets had the day off on the ice yesterday but that didn’t mean that they weren’t working behind the scenes.  The roster was reduced a further five players and here are the remaining 27 players on the roster.

The Telegram:  More Jets landing in St. John’s.  If you were curious what the IceCaps training camp is looking like they currently have 36 players in (or on way to) St. John’s.

Toronto Star:  David Clarkson speaks mind on 10-game suspension.  He had been muzzled but finally Clarkson was given an opportunity to chat with the media about the incident that is going to cost him the first 10 games of this season.

Star-Ledger:  Devils sign Damien Brunner to two-year, $5 million contract.  A nice but curious signing by the Devils considering that it was rumoured that the Wings were offering him 2.5 million and Brunner was looking for 3-3.5 million.