Winnipeg Free Press:  Lowry lookin’ good, real good.  He has said all the right things off the ice and now we see his proficiency extends to his on ice play as well.  Coach Noel praised him (see below) for being able to keep up with the pace despite having missed a significant period of time due to the injury he sustained at the beginning of training camp.

Winnipeg Free Press:  Clitsome in a happy place.  From waiver claim to go to guy, Clitsome has come along way in a short while with the team.

Winnipeg Sun:  Oilers edge Jets 2-1.  Not exactly the ‘A’ squad for Winnipeg as they fell to Edmonton in a late night contest.  Chris Thorburn made the most of his return to action picking up a goal in the 1st period.

Winnipeg Sun:  Tough decisions loom.  As unenviable as it can be to have to make difficult choices, this is exactly what the Jets need in order to improve.  The brass are going to be heavily evaluating the team over the next day or so in anticipation of further whittling down the roster.

Winnipeg Sun:  Jim Slater hopes to be more of a factor this season.  In order for the Jets to have success they are going to need him to be healthy all season long.  He and Frolik will be excellent on the PK. 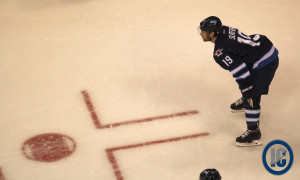 StarPhoenix:  Expecting to be firing on all cylinders in Saskatoon.  Should be interesting to see which lineup the Jets go with for the game on the 27th.  As could be heard in coach Noel’s post-game comments following the loss to Edmonton, he is more than ready to get his regular season lineup together on the ice.

StarPhoenix:  Home is where the hockey is for Cheveldayoff.  The Saskatchewan native is excited to take his team to his home province when the Jets head to Saskatoon to play the Bruins on Friday.  While the Jets will be the away team, you can bet that our neighbors to the West will be cheering for Cheveldayoff and the squad he manages.

Illegal Curve: Jets cut 5 players. The roster is now down to 32 players at camp. Jets have to get it down to under 23. Who do you think will be on the Opening Day Playing Roster? 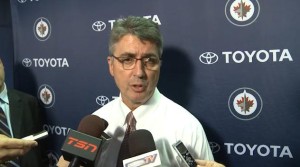 Coach Noel post-game audio –  Assessment of the game.  What did Adam Lowry show him in his pre-season debut?  Were the Oilers allowed to get to the front of the net too easily?  Adam Pardy’s game.  Getting regulars into games together.  Update on Zach Bogosian.

For those unable to listen:

Update on Bogosian: “Just a little tweak.  We wanted to make sure he didn’t overextend himself.  It will be day to day.  I don’t think it was a shot block.  Just an ailment he has”.

St. Louis Post-Dispatch:  Blues sign Morrow, add ‘wounded animal’ to crowded forward group.  A nice veteran presence for coach Hitchcock and one motivated to show the rest of the league that they made an error bypassing him.