Note II:  The Jets head to Edmonton for pre-season game six.  They are currently 1-3-1 having lost in a shootout on Saturday night to the Wild.  Tonight’s game starts at 8:30 pm cst.  Broadcast:  TSN Jets/TSN 1290 Winnipeg.

Update:  Jets cut 5 players.  The roster is now down to 32 players at camp.  Jets have to get it down to under 23.  Who do you think will be on the Opening Day Playing Roster?

NHL.com:  Jets target first playoff berth in Winnipeg.  There is a lot of optimism in the city as many fans feel this team can finally crack the top 8 and get into the playoffs.

NHL.com:  Jets seeking right fit for Scheifele.  Fans want to see their first round selection in 2011 to be successful but the question is where will that be?  Will it be on the 2nd line?  3rd line?  Or perhaps seasoning in the AHL?

Winnipeg Free Press:  This rivalry could get really Wild.  They are branded as Minnesota Nice and we are known for being Friendly Manitoba, but perhaps both labels will be removed when the two teams go to battle.

Winnipeg Free Press:  Lowry has the size, skills to succeed.  While we haven’t seen much of his on ice game, I have been very impressed with him off the ice.  He answers questions in scrums intelligently and with a maturity beyond his twenty years.

Winnipeg Sun:  Lowry gets chance against Oilers.  Coach Noel isn’t putting too much pressure on the young prospect since he may be a tad behind the guys who have been training full out but there are clearly expectations that he is going to be quite a nice player as he continues to gain experience. 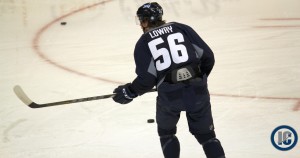 TSN:  Noel finds bright spots in Jets loss.  Sometimes the coach has to be a bit of an optimist following a loss.

Illegal Curve:  Coach Noel training camp scrum.  The power play last night.  Stepping up game.  Getting to see Lowry tomorrow night.  Injury update (Wheeler day to day, banged up).  Importance of stepping up the physicality.  How did the routine for his team change, traveling the day of the game?  How many spots are left up for grabs?