Illegal Curve:  GM Cheveldayoff and Executive Chairman & Governor Mark Chipman presser.  Listen to them discuss the reasons for the extension.

NHL.com:  Jets look for offense from rebuilt second line.  Without question the biggest question mark that the Jets face as they enter the 2013-14 season.

Winnipeg Free Press:  Ex-journeyman now bench boss.  Eakins received a nice ovation from the crowd during a lull in the game when they spoke about his ties to the community.  Following the game Ezra asked him about his relationship with the city and he said “I’ve always got a soft spot in my heart for Winnipeg”.

Winnipeg Free Press:  Jets-Oilers stars, summary.  A much improved game for Winnipeg, and that isn’t simply because they won the game.  You could start to see the flow improve.  Frolik was the most noticeable Jets player for me.

Winnipeg Free Press:  Kane not shy about wanting ice.    Nor should he be.  Stars wants to be out there.  They want to seize every opportunity they can to win.

Winnipeg Sun:  First pre-season win includes late rally from Oilers.  Ken with a great breakdown of more than just the game as he looks at possible defensive pairings, Buff getting physical, forward line combos and much more. 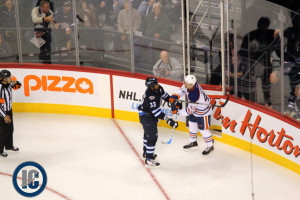 Winnipeg Sun: Grant Clitsome enjoying his newfound job security but not getting too comfortable.  He has stability but the desire to continue to improve his game and to avoid becoming complacent.

TSN:  Jets Fantasy Preview.  For those of you with drafts upcoming here are some of the players you may be selecting for the 2013-14 season.

The Labradorian:  Jets’ first IceCaps assignee was born in St. John’s.  Some info on Zach Bell who the Jets sent to St. John’s a few days ago. 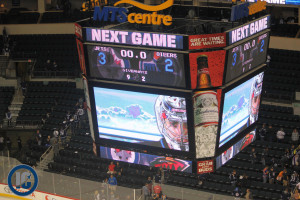 Coach Noel post-game:  The Jets bench boss evaluates his team’s win, including the 3rd period breakdown which led to an almost Oilers comeback.

Illegal Curve Post-game podcast from the Press box: Host Drew Mindell and Analyst Ezra Ginsburg break down the Jets play against the Oilers.