Winnipeg Free Press:  Have the Jets finally arrived?  Still seems like this team is a year or two from really having the depth the top guns in the NHL possess but obviously players are never going to use that excuse.  Hence the reason why Zach Bogosian when asked if signing this core was a failure if they don’t make the playoffs merely said “I’m not thinking of not making the playoffs.  We need to have that positive outlook that we are going to make it.  But for now we are going out there every night to win and get into the playoffs”

Winnipeg Free Press:  Let the DRAMA begin.  Ed looks at the many sub plots that are cropping up around camp.

Winnipeg Free Press:  Byfuglien wants ‘to be the best player out there’.  His answer to the question about how many exhibition games he wants to play (“I’d rather play all of them.  Who wants to sit and watch?”) was a pretty good one.

Winnipeg Sun:  Slimmed-down Dustin Byfuglien ready for coming NHL season.  He was pretty noncommittal when discussing his weight (for what I’m sure he hopes will be the last time) following scrimmage yesterday.  But it is clear that the opportunity to play with Team USA is motivating him and as Paul says this could be the best thing that ever happened to the Jets. 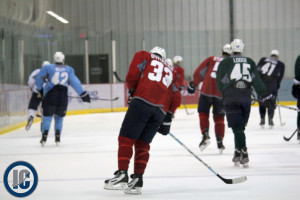 Winnipeg Sun: Ondrej Pavelec thrills family of boy stricken with cancer. Always nice to hear about a player bringing some joy to a young child who is undergoing such a difficult challenge.

Winnipeg Sun: Coach Noel wants to take it slowly with Scheifele. It is clear that the Jets bench boss is trying to deflect the pressure from his young centre.

Winnipeg Sun:  Free agent defenceman Ian White says he has a lot of game left, hopes to make some noise in camp.  If he can comfortably play the left side, he might have some more appeal to the Jets.

Global News:  Scheifele sheds blood as he tries for Jets.  One of the things I noticed during the scrimmage yesterday was how many guys got hit with high sticks.  I had noticed the high stick that Scheifele took behind the net and to his credit he finished his shift before seeking medical attention on the bench. 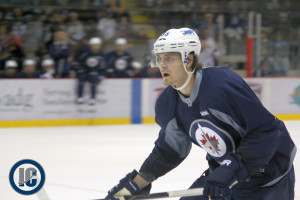 Illegal Curve: Coach Claude Noel training camp scrum.  Thoughts on training camp so far.  Who caught his eye?  Anything he thinks needs work?  Any news regarding Lowry falling into the boards.  How does he feel about the trial of hybrid icing?  Did he do anything in anticipation of the upcoming games?  Will Scheifele get a chance between Kane and Setoguchi?  What will make a good training camp for him?  What will he be watching for with Scheifele to see if is ready to jump to the NHL?  Is it Scheifele’s spot to lose?  Cutting down the numbers.  Finding Kane linemates.  Thoughts on Matt Halischuk.

Jets official site:  Joshua Morrissey (video).  Catch up with the 2013 1st Round draft pick after 1st day of training camp.

Raleigh News and Observer:  Canes sign defenseman Ron Hainsey.  This comes as a surprise to nobody once the full extent of the injury to Joni Pitkanen became clear.  The former Jets defenceman makes his return to Winnipeg on March 22nd.

Detroit Free Press:  Daniel Cleary agrees to 1-year deal with Detroit Red Wings.  Which is why until you have a signature on a contract it isn’t a done deal as the Philadelphia Flyers learned this week.