Note: We wanted to extend our condolences to the entire Chipman family on the passing of Mr. Robert M. Chipman.  He was well known in the Winnipeg community and accordingly, was nominated to the Winnipeg Citizens Hall of Fame in 2007.  The profile written about him gives you insight into the type of person he was, with one quote in particular that should resonate with every citizen of Winnipeg;

“This is our city – we want to be proud of it. We all need to contribute to making it an increasingly better community.”

Winnipeg Free Press:  Jets getting fired up about the new season.  As the temps start to cool off it is heating up at the rink where the players are getting ready for another season of NHL hockey.

Winnipeg Free Press:  Jets D-man shows up for camp looking fit as a fiddle.  While I am overjoyed to hopefully no longer have to discuss Buff’s weight, interesting to read about the exit meeting reportedly getting heated between Noel and Byfuglien.

Winnipeg Free Press:  Tourney bolsters faith in prospects.  You cannot win them all and while the Jets prospects looked like they might go 3-0 in the tournament, they were edged by the young guns from the West coast.  Jets brass had to leave B.C. happy with the added depth in the organization.

Winnipeg Free Press:  The future is now.  Lots of pressure on both Scheifele and Trouba to get to that next level.  Clearly Scheifele has the added pressure of being the team’s first 1st Round draft pick and trying to avoid the disappointment of being sent to the AHL for further development.

Winnipeg Sun:  Strong showing by Jets rookies at Young Stars Classic.  While you certainly do not want to put too much stock in a tournament featuring rookies, it is still a good thing to see the depth that this organization is starting to develop. 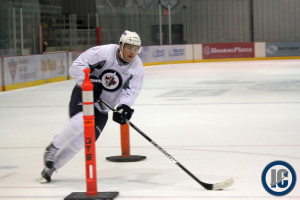 TSN Radio 1290:  Jets GM Kevin Cheveldayoff recaps the Young Stars Tournament.  If you missed it, listen to the Jets GM wrap up the tournament and assess his team following yesterday’s 2-1 loss to the Canucks prospects.

Illegal Curve:  Player audio from IcePlex.  Catch up with the Czech duo of Ondrej Pavelec and Michael Frolik as they discuss their offseason training, being in Winnipeg, expectations for the season and much more.

Newsday:  Islanders name John Tavares team captain.  The Islanders continue to develop a young core group that they have drafted over the past number of years and naming Tavares captain is an easy decision.

Calgary Herald:  Kiprusoff says his goodbyes in vintage, understated fashion.  I’m fine with a player choosing to not have an emotional goodbye presser.  If he would prefer to end his long career with a press release, that is his prerogative.