Note II: A reminder that the Illegal Curve Hockey Show on TSN Radio 1290 is back to our regular hours. This means the show will broadcast from noon to 3 pm today. Guests:  Dennis Beyak (TSN),  Scott Powers (ESPN Chicago). George Johnson (Calgary Herald).

Winnipeg Free Press:  This could be Telegin’s year.  Now that he has recovered it will be nice to see what he can do when playing at 100%.

Winnipeg Free Press:  Kichton scores twice in Jets prospects’ 5-3 win.  The excitement of seeing Jets jerseys back on the ice was considerable for fans who have been waiting since last April to cheer on their team, even if it was simply for a prospects game.

Winnipeg Sun:  Jets prospect already a pro.  While Jets fans groaned when the team selected a defenceman in the 2013 1st Round, Joshua Morrissey is looking like a real solid selection for the team in the future. 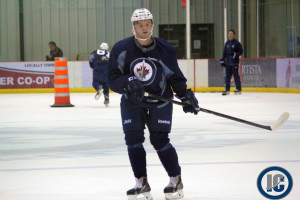 Calgary Herald:  Will the frank, fiery Brian Burke really be able to stay in the background?  This as well as several others questions will be answered by George Johnson when he appears on the show today.  My personal guess is no chance that Burke stays in the background.

Globe and Mail:  Luongo puts off-season uncertainty behind him, gets back on the ice with Canucks.  And he is already having some fun with being called a Diva by some in the local media.