ESPN:  No underestimating USA this time.  Some quotes at the end of the article by the Jets Blake Wheeler.  I can tell you that the Jets dressing room will be a fun place to be with all the different countries represented and with the trash talking that will accompany the Olympics, both pre and post.

Blake Wheeler quip on whether the U.S. is behind because Canada played ball hockey Monday: “I’d argue that we’re ahead.” #nhljets #nhl

Dustin Byfuglien on what he has learned since the 2009 Olympic orientation camp: “I learned that I wasn’t a forward.” #nhljets #blackhawks

NHL.com:  Dustin Byfuglien at Team USA Camp (video).  Talks about potentially playing for Team USA at Sochi as well as being a member of the Winnipeg Jets. 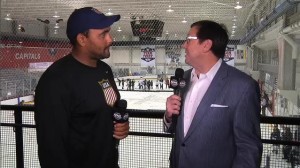 NHL.com:  Blake Wheeler at Team USA Camp (video).  Getting an opportunity to possibly represent his country.  How does the big ice impact his game?  What do the Jets have to do to get into the playoffs?  What is it like playing in Winnipeg?

Winnipeg Free Press:  This is Toews’ team.  The pride of Winnipeg looks to add some more hardware to his mantle.

Globe and Mail:  Bigger ice surface in Sochi a point of emphasis for Team Canada.  There is going to be need for speed at the Olympics with the bigger ice surface.  Canada won gold at the last two Olympics held in North America (2002 & 2010) but have not fared nearly as well overseas as they didn’t medal in Italy (2006) or Japan (1998).

Star-Ledger:  Devils complete deal to re-sign Adam Henrique.  The Devils had to decide between a long-term or short-term deal, and decided that the Brantford native merited the former.

Winnipegger Jonathan Toews gets called for interference which means Winnipeg is heading to the power play as they look to get back to a two goal lead.

Neal Pionk with a little fumble puck and the Hawks almost make Winnipeg pay with Toews and Kane getting a chance for Chicago.