Note:  Reminder that the Illegal Curve Hockey Show on TSN Radio 1290 is now on summer hours.  This means the show will broadcast from 10 am to noon on Saturday. Join us tomorrow (as I take over for Richard who will be away for the weekend) for two hours of exciting hockey talk.  Guest:  Jeremy Rutherford (St. Louis Post Dispatch).

ESPN:  Uni Watch Power Rankings.  If you missed it yesterday, we took a look at a uniform power rankings on ESPN and the Winnipeg Jets jersey has slipped two spots.  Where do you think the Jets jersey ranks in terms of NHL jerseys? 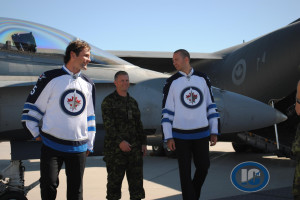 St. John’s IceCaps site:  IceCaps release 2013-14 schedule.  If you are curious to see the Jets AHL affiliate this upcoming season, they released their upcoming schedule.

Washington Post:  Grabovski agrees to deal with Capitals.  The addition to Washington certainly makes sense with the lack of depth they have at centre.