Hockey Prospectus:  Top 10 prospects of 2013.  A late add to yesterday’s papers, past guest on the Illegal Curve Hockey Show, Corey Pronman put out a list of the team’s organizational depth  (rated 12th in the league) as well as an assessment of those ten prospects on the list. 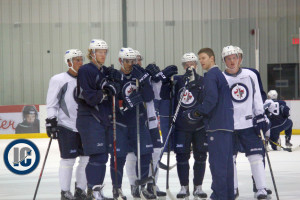 According to Scott Brown (Senior Director of Corporate Communications for the Jets);

#NHLJets announce pre-season game vs. #nhlbruins on Sept. 26 at MTS Centre will now start at 6:30pm CT due to broadcast request.”

Illegal Curve:  First Annual Winnipeg Jets Gala Dinner – Save the Date.  The date is October 16th, 2013 with proceeds going towards the True North Foundation.  Further details are still to come.

The Sudbury Star:  O’Dell hopes to take off with Jets.  Nice article on the Jets prospect which I missed over the weekend.  Sounds like he is training hard for the start of camp.

NHL.com:  New Coyotes owner LeBlanc believes in Phoenix.  Hopefully fans in Arizona show that they also believe in the product and are willing to shell out money for season tickets.

Globe and Mail:  76ers owner Harris could add Devils to portfolio.  Unlike the ownership situation above, this was handled fairly quickly by NHL standards.