Note:  Reminder that the Illegal Curve Hockey Show on TSN Radio 1290 is now on summer hours.  This means the show will broadcast from 10 am to noon on Saturday. Join us tomorrow for two hours of exciting hockey talk.  Guest: Adam Kimelman (Deputy Editor, NHL.com),  AJ Zeglen (Manager @ Focus Fitness @ IcePlex).

Winnipeg Free Press:  Antropov taking speed, grit to KHL.  He seemed to be a polarizing figure as some fans loved his game, whereas others loved to hate his game.  Either way, his best days were clearly behind him and not wanting a big pay cut, he heads back overseas to ply his trade in the KHL. 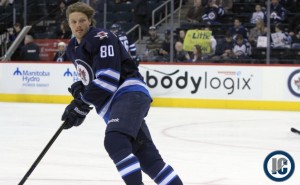 Illegal Curve:  Goalie prospect Eric Comrie interviewed by TSN Radio 1290.  He discussed his Team Canada camp so far as well as the play of the other two Jets prospects on the team, Nic Petan and Josh Morrissey.

Illegal Curve:  Zach Bogosian interviewed by TSN Radio 1050.  Topics covered include his shootout winner vs. Leafs.  His new seven year deal.  Core group locked up.  Difficulty in going East.  Benefits playing in Winnipeg.  Representing his country for Team USA potentially.  Trouba’s impact.  Mentoring a player like Trouba.  How has his offseason been?

NHL.com:  Free agent Teemu Selanne still undecided about his future.  While fans in Winnipeg want a storybook conclusion to this one, the likelihood is that the Finnish Flash stays in Anaheim.  Of course, since that is the second most desirable game that fans want to see on the IC poll (vote if you haven’t), having a chance to see him in Winnipeg one more time isn’t such a bad prospect.

Globe and Mail:  New Jersey Devils the latest ownership headache for NHL.  I say move them back to Colorado and resurrect the Rockies.  I kid of course.  Will this become another black eye on the league or can they find someone else to take on this team?